Curriculum information:  PowerPoint Presentation: (Same information as in the above PDF document.)

View Kim’s 2002 Journey (PDF Doc)  This is a summary of her journey, created by Kim after her journey.

View Kim Harrick’s Postings and Lessons from the Trail

I would like to dedicate my involvement in the 2002 Iditarod Sled Dog Race to Michael Blank and his family. Michael was a student in my 2nd grade class the first year I taught the Iditarod in-depth. Michael’s trail led him to heaven in the Spring of 2001.

Michael taught me many things I hope to embrace throughout the race. He had a heart that was kind to everyone he met. He observed situations and was able to respond with a broad perspective. And Michael’s sense of humor continues to make me laugh today.

May Michael’s family know the peace, love, joy and laughter Michael brought to so many people’s lives. Thanks so much for sharing him with me.

In loving memory of Michael Blank. 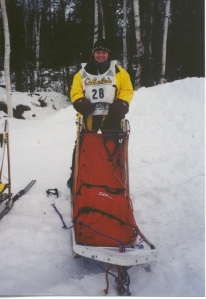 Growing up in Edwardsville, Illinois, the oldest of three children, I enjoyed camping, hiking, softball and field hockey. My father was a professor of business management and my mother was a mathematic teacher then a homemaker. Together, they modeled the value of education and the importance of hard work. They emphasized that if you work hard and try to learn from life’s experiences, you have a high probability of achieving your goals. During college, I noticed that my most fulfilling experiences were related to my involvement with children. Whether it was teaching field hockey to elementary students or facilitating adolescent discussion groups, I decided that teaching needed to be part of my life.

After I graduated I took a teaching job in Saipan, a small island that is part of the Northern Mariana Islands in the South Pacific. It was most challenging to learn the customs, traditions and way of life encompassing the Chamorro culture. I taught second grade at Mount Carmel Catholic School.

I returned to the United States and secured a second grade teaching position at a large, progressive school district in the St. Louis, Missouri, area. Over the past ten years I have dedicated my life to the children of Ridge Meadows Elementary School in the Rockwood School District.

In 1996, I was selected as the Ridge Meadows Teacher of the Year. Three years later, I received the district’s most prestigious award, Rockwood’s Outstanding Service in Education (R.O.S.E.) Award. The award recognizes achievement in four categories: excellence of character, performance, leadership and service. Since I received that award, I have served on the R.O.S.E. award selection committee.

During my time away from school, traveling has always been a priority. I have been able to see many parts of the world and have enjoyed each experience fully. My love for international travel started while I was in high school. My field hockey team traveled all over England to compete against other club teams. One year later I departed to Finland and Sweden to visit a friend and was able to experience the Scandinavian way of life. The Saipan adventure included travel to Japan and Hawaii. Years later, I decided to fulfill a dream of backpacking across Italy. I euro-railed and backpacked to Venice, Rome, Florence and Sienna, staying at hostels along the way. On a recent trip from California to Illinois, my sister and I stopped at Yosemite, the Painted Desert and the Grand Canyon! As children, we dreamed of climbing a mountain. That dream became a reality in August 1999 in Yosemite National Park as we conquered Half Dome.

During the summer of 2000, I became engaged to Sean, a pilot for Northwest Airlines. Sean has spent many seasons in Alaska and longed to share his love for this great state with me. It was then that I traveled with Sean to Alaska and visited the Iditarod Headquarters for the first time. I acquired several children’s books, teaching materials, videos and rolls of film to share with my future classes. Raymie Redington gave me my 1st dogsled ride around the headquarters. He convinced me to apply for the Iditarod Teacher on the Trail Program. After taking his advice, I was selected as a finalist and look forward to the opportunity of teaching from the trail in 2002!

July 14, Sean and I celebrated our wedding day with family, friends and former students. We honeymooned in Bermuda and returned to our new residence in Kirkwood, Missouri.