Laura Wright, 2016 Iditarod Teacher on the Trail™, and Stacey Cardy, Iditarod Communications Volunteer, take in the sights of Talkeetna.

“Funky, fun, and friendly,” are words often found in guidebooks to describe the quaint, tiny town of Talkeetna, Alaska.  For me, Talkeetna felt a little like being back home in Austin.  It has a wonderful, quirky, appealing charm, and the teachers from the Iditarod Summer Camp were anxious to wander the main thoroughfare and take in the sights and sounds.  We had heard the rumors in our caravan on our way north from Anchorage; a cat for mayor, annual moose drops on July 4th and the famous Talkeetna Bachelor Auction. Could it all be true? Happily, Talkeetna lived up to its expectations for all of us.

We arrived and made our way to the lovely Wildflower Cafe for the annual Teacher Summer Camp luncheon created and prepared by “Wildman” Chef Jerome Longo.  Chef Longo is the real deal.  His passion for cooking and care in the kitchen led him to serve President Bush Sr. in the White House early in his career, an impressive pedigree.  Later, with a strong case of wanderlust and desire to climb Denali, he made his way to Alaska to pursue his dreams.  Chef Longo was a rookie Iditarod musher in 1997 and ran the last great race a total of 5 times, finishing an impressive 27th ranking in 1999.

Two teacher campers wait for our seating at the Wildflower Cafe

The Mat-Su Valley Frontiersman interviewed Chef Longo last year, and I loved his cooking sense and his values in the kitchen; sustainable, farm raised and local.  He shared with us his famous carrot cake, a staple in his sled in his old Iditarod days.  He granted us a little of his time from the busy kitchen, and was gracious enough to congratulate me and wish me safe travels on the trail in March.

Our group wandered onto the main street of Talkeetna, and separated to walk and shop the many attractions for visitors and locals alike.  Not only is Talkeetna the starting point for top climbers heading up to Denali, it is also known for its camping, hiking, and fishing.

As we meandered down Talkeetna’s main avenue, I began to notice free-standing decorated and hand-painted moose statues.  Now this reminded me of home!  In 2011, Austin was honored with hosting the international charity, “Cow Parade” and I still remember fondly the decorated bovine statues all over our fair city.  The statues are auctioned off at the end of the host city’s year, and over $30 million has been raised world-wide from these events.  I love that Talkeetna has its own quirky version of the cows on parade, with moose of course!

Cow Parade Charity Site – ( You are leaving a secure site)

A moose on the loose stops for a selfie with Laura Wright and Stacey Cardy!

According to the Talkeetna Chamber of Commerce, the Denali Arts Council and the Talkeetna Historical Society work together with local artists to decorate the “moose on the loose” for display throughout downtown.  Inspired by the “Cows on Parade” the moose were auctioned off this past 4th of July with proceeds supporting local projects.  Following the auction, Talkeetna residents and visitors enjoyed a cardboard boat regatta, dunking booth, and finally the annual “moose poop drop” in the VFW parking lot.  Talkeetna is my kind of town. 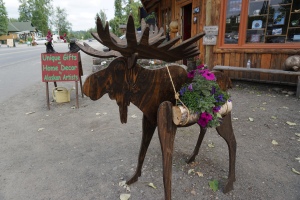 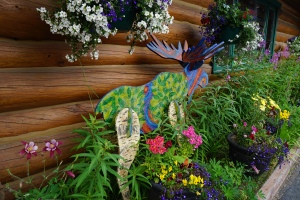 I felt inspired myself with the moose statues and the quirky, fun, charitable spirit of the town, and my teacher wheels were spinning.  How could I incorporate this project into my classroom, or even school-wide at my school?  I stumbled into a gift shop and found the Talkeetna moose pattern to share.  Whitfield’s is a wood pattern company offering not only moose patterns, but bear, eagles, bison, and many others; some are free-standing and others are flat.  What a great fundraiser for a school, and a fun way to bring an Alaskan theme to your campus.  Wood can be donated, and art teachers can work with classes to make them unique and later auction them off as part of a school-wide fundraiser.  Expect to see more about my “moose on the loose” project as we study this critter as a part of our Alaskan nature study!

The Whitfield Moose Wood Pattern – (You are leaving a secure site)

Our group continued our tour, snapping fun photos, shopping at the gift shops, and some of us even sampled the local rhubarb crisp, in season, and a great Alaskan treat!  There was one special stop we had to make next; Nagley’s General Store. 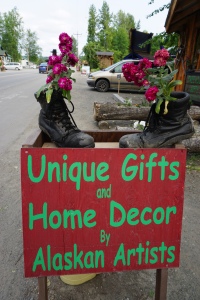 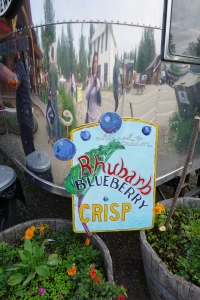 Nagley’s is everything I thought it would be.  Founded in 1921, according to the Talkeetna Chamber of Commerce, it is the “longest continually operated general store in the Northern Susitna Valley.”  This is a must stop for any visitor to the town, and locals welcome you warmly.  The history is thick in this place; it fills the air.  Every space is filled with a combination of grocery store, bar, ice cream shop, and Talkeetna museum.

Eureka! As we made our way around, quietly nestled in his sleeping nook on the floor, between the ice cream coolers, was none other than Stubbs, the honorary mayor of Talkeetna!  Moments like this do not come along everyday, and our teacher group was honored to spend a few moments with Talkeetna’s local celebrity and hero, having survived and bounced back from an injury last year.  As word spread of his injuries, donations and warm wishes flooded Nagley’s from around the world, and now Stubbs has his own mailbox on the floor.

Sometimes called “Alaska’s most famous feline”, Mayor Stubbs, now 17, lives a humble life at Nagley’s, and can often be found curled up in his kitty basket on top of the freezer.  His fame is well known by travelers who come to the store in the hopes of seeing him or taking a selfie.  Mayor Stubbs has his own Facebook page where folks from all over can keep up with local happenings in Talkeetna.

Mayor Stubbs on Facebook – (You are leaving a secure site)

Stacey Cardy, long-time Iditarod communications volunteer, requested an interview with Mayor Stubbs, and in between cat naps, he agreed to give us a few moments of his time.

Q: “Mayor Stubbs, thank you so much allowing us to speak to you!  We understand it is a busy time of year for dignitaries such as yourself.”

Q: “Mayor Stubbs, we are so happy that you have had such a wonderful recovery from you injuries last year.  How are you feeling?”

Q: ” At this point, can you tell us how you feel in general about dogs?”

Q: “That is understandable, Mayor.  There is some talk that perhaps you may retire from your honorary position as Mayor of Talkeetna.  Can you give us an update?” 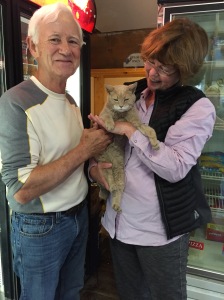