“It’s never too late to live your dream,” reads the banner heading on Gwenn Bogart’s musher web site.  I can’t think of a better expression to describe Gwenn.  She is vivacious, uplifting and positive, and this year she is determined to make it “from home to Nome” as she tries a second run as a rookie musher in the upcoming Iditarod 2016.  The teachers from the Iditarod Teacher Summer Camp had the great fortune of hearing Gwenn talk about her life and her deep desire to mush in Alaska.  For the next year, she will be under the care and training of Vern Halter, veteran Iditarod musher, at his Dream a Dream Dog Farm.  Vern worked with the great Cindy Abbott, the 2015 Red Lantern winner, and under his mentorship this year, Gwenn will be prepared for the challenges ahead.  As the 2016 Iditarod  Teacher on the Trailˇ I have chosen to follow Gwen as our rookie musher this year.  She is going to share her preparation for The Last Great Race with teachers and students around the world, so they can all better understand the hard work and perseverance that it takes to bring your sled and dogs to the starting line on 4th Avenue in March.

Gwenn at the annual Iditarod Volunteer Picnic, signing up for Iditarod 2016

Gwen’s bio from the Iditarod site:

Gwenn Bogart, 58, was born and raised in Vermont. She has B.S. and B.A. degrees from Colorado Technical University. Gwenn has had professional careers in horsemanship and fly fishing. She co-founded Casting for Recovery (CFR), www.castingforrecovery.org, an international breast cancer support group headquartered in Manchester, Vermont, that uses fly fishing for mental and physical healing. Gwenn also has a private pilot’s license and flew a Cessna 150 from the Green Mountain State of Vermont to the Last Frontier in 2011. Gwenn’s two grown daughters, Hannah and Molly, make their homes in Oregon and Vermont. Gwenn moved to Alaska when she and Dave Bogart, a former member of the Iditarod Air Force, were married in June of 2012. She began mushing in 2012 and has run the Sheep Mountain 200, the Copper Basin 300 and the Northern Lights 300. This will be Gwenn’s second attempt to finish the Iditarod and she humbly refers to herself as a rookie’s rookie. She lives in Wasilla with her husband, two border collies and one wiener dog named Frank. She enjoys fishing, flying airplanes, skiing, hiking, riding her road bike and perusing her artistic skills. 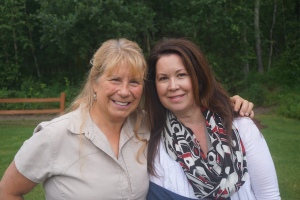 Gwenn Bogart and Laura Wright, Iditarod 2016 Teacher on the Trailˇ