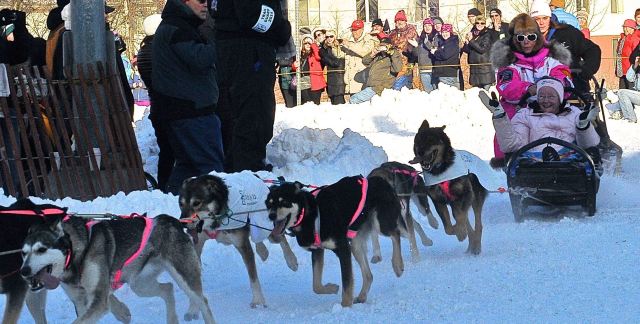 George Washington, Thomas Jefferson, Teddy Roosevelt, and Abraham Lincoln. Those names are among the most impressive presidents our country has witnessed. They also are the four faces on Mount Rushmore. My class recently created their own Mount Rushmore dedicated to mushers, Musher Mount Rushmore.

The lesson started with a short discussion about Mount Rushmore; what it is, where it is located, and who are the famous faces of the mountain. The majority of my classes did their Musher Mount Rushmore using 2015 Iditarod mushers. I had a high group in each class create their mountain using all current and past Iditarod mushers.

The students used the Musher Profiles and the Race Archives on the Iditarod website to help them research and determine their four deserving mushers. We discussed as a class what some qualifications they feel would be necessary for a musher to make the mountain. The students decided that finishing first is not necessarily a qualification. They also looked into the amount of times a musher has finished the race, top ten finishes, and top five finishes. Some made it a requirement that the musher had to finish a certain number of years before they even qualified for their mountain. After choosing each musher for their mountain, students must defend their choice. When defending their mushers they must use factual evidence from the website.

The groups will then get to actually create their Musher Mount Rushmore. A website called Face in Hole is designed for kids to upload a picture and place it in a famous scene. The groups will upload their four mushers and place them in Mount Rushmore. Reminder: when looking for images, search for images labeled for reuse. This can be done on Google Images under Search Tools, then Usage Rights. The website gives kids four options to share their image; Twitter, Facebook, print, or save to a computer. Since my class uses Twitter, each group will share their image to Twitter. 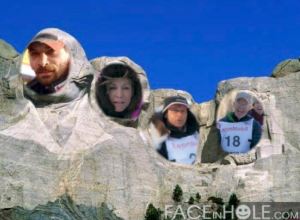 The groups will then share their Musher Mount Rushmore with the rest of the class defending each of their choices. I mentioned above that I had a high group in each class create their mountain using all Iditarod mushers. Another option to enhance this lesson is to create their mountains using mushers from the Jr. Iditarod. A modification to using the Face in Hole website is to have your students draw Mount Rushmore and draw their mushers faces into the mountain. 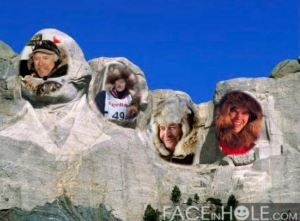 This common core aligned lesson is another opportunity for students to learn about current and past Iditarod mushers. Just prior to this lesson I had my students complete the Iditarod Trivia Tuesday Meet the Mushers. This trivia lesson made the students more familiar with the mushers and helped them when choosing their four mushers for their mountain. Soon after the Musher Mount Rushmore lesson, my students will be choosing a musher to follow during the race.