Today, the teachers had a chance to visit Vern Halter’s Kennel, Dream a Dream Dog Farm.  He is helping Iditarod Rookie Cindy Abbott in her quest to complete this year’s Iditarod.  Cindy attempted a run at the race last year but broke her hip during a fall and ultimately had to scratch.  She is back and ready to try again this year!  I’m super excited about her entry this year as she is taking several of the dogs I got to meet and hang out with this summer during the Iditarod Summer Camp for teachers!  It will be great fun to watch them head down the trail.

Cindy is one of several mushers who are racing not just to have the challenge of the race, but also to raise awareness for a cause.  Cindy’s cause is raising awareness about Rare Diseases.  Cindy herself has been diagnosed with Wegener’s granulomatosis which is a rare disease that causes inflammation of blood vessels which then restricts the blood flow to various organs.  It most typically affects the kidneys, lungs, and upper respiratory tract.  It can be fatal if it’s not treated.  Cindy herself went undiagnosed for about fourteen years,but she hasn’t let it stop her!  She climbed Mount Everest and is now coming back to claim an Iditarod belt buckle!  Her dogs will be wearing special dog coats that say VASCULITIS Racing for Life coats.  When she gets to the finish line in Nome she will unfurl her National Organization of Rare Disorders (NORD) banner to bring awareness to that organization.  She feels compelled to do this so that when people hear, “I don’t know what’s wrong with you,” from their doctors, they will know that there is somewhere they can turn for more information.

Our special friend, Iditarod rookie Monica Zappa, is mushing for a cause as well.  Her cause is an environmental one.  Monica is very concerned about the Pebble Mine which is proposed to be built at the mouth of Bristol Bay.  She is working hard to prevent this mine from being built and is using her Iditarod rookie run, in part to bring awareness to this cause.  She is concerned that the mine, if built at the mouth of Bristol Bay, would be disastrous for the fishing economy, tourism and natural beauty of the region.

In an earlier post, I talked to you about how Martin Buser and Aliy Zirkle are bringing awareness for the importance of vaccinations to the villages along the trail by carrying vaccine in their sleds.

The mushers take different strategies when they are planning to bring awareness to a cause.  Monica has dog jackets for the dogs to wear, signs on her trucks, and has teamed up with other advocates to broadcast their message loud and clear.  She also makes a point of talking to students about the cause when she does presentations for schools.  She prepared special informational packets to send to the schools in the villages she will visit as part of this year’s race. 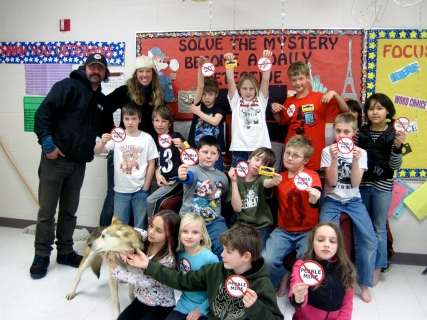 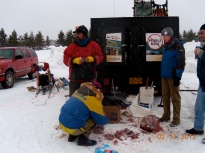 The mushers hope that the national attention the Iditarod will garner will help to spread their message to a larger audience.

A neat project or journal entry for your students may be to have them think of a cause they hold near and dear to their hearts.  If they were mushers, how could they use the Iditarod to help them get their message out there to the larger population?  Designing jackets for the dogs is one way – what would their designs look like?  What other ideas do they have for introducing people to their cause?